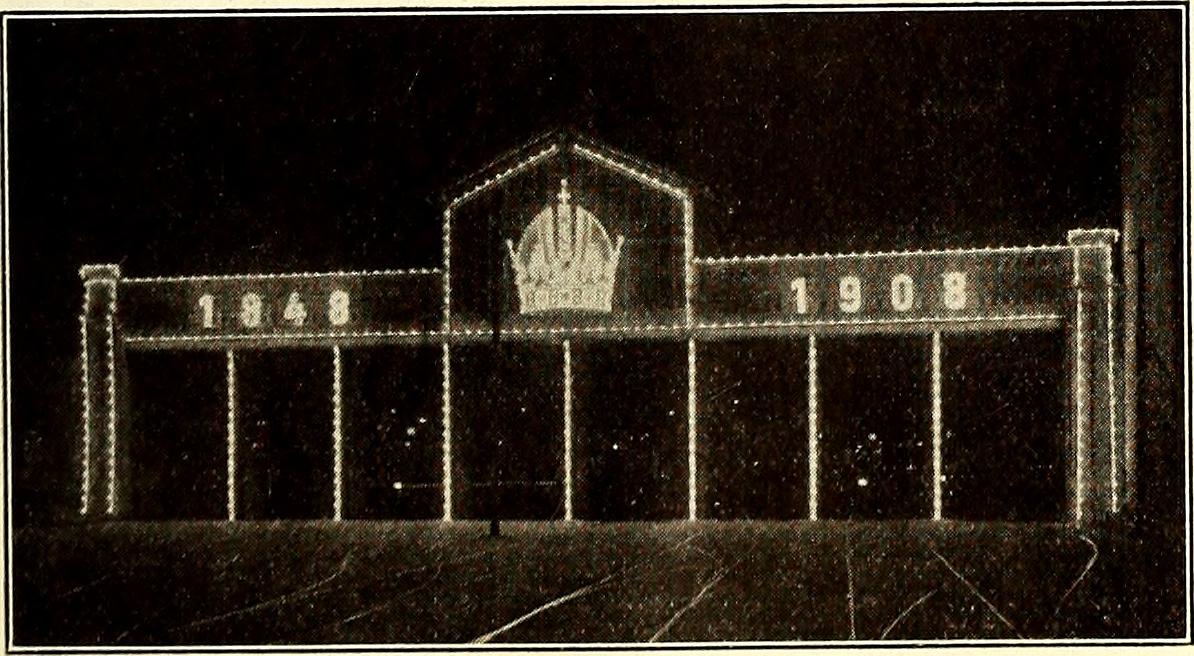 
Text Appearing Before Image:
with a 4-light glass. Each station contains a seataround the inside wall. In front of each of the stations is a cinder platform 5 ft.wide and 20 ft. long, the curbing of which is of concrete. With one exception, the stations are located on the northside of the track, giving a southern exposure to the frontsof the buildings. The Railroad Commission of Indiana, in its annual re-port, published recently, referred to these sheds as credit-able to the company and useful to its patrons. The foregoing description and the accompanying illus-tration were received from Gus Muhlhausen, manager ofthe company. AN OVERLOAD INVERSE TIME-LIMIT RELAY DECORATIVE ILLUMINATION IN VIENNA The Vienna Municipal Tramways took an active part inthe jubilee which was held in Vienna last December tocelebrate the sixtieth anniversary of the accession to thethrone of Emperor Francis Joseph I. Through the cour-tesy .of L. Spangler, manager of the Vienna tramwayssystem, views are published of the illuminated train of

Text Appearing After Image:
Illumination of Car House cars which traversed the lines of the company on theevening of Dec. 1, and also the exterior view of one ofthe principal car houses of the company, showing the ar-tistic arrangement of lamps. The train of cars was made From the standpoint of uninterrupted service the idealprotection against overload on a heavily loaded power orlighting circuit is one that opens the circuit only after theoverload has continued long enough to approach more orless nearly to the danger point. A new relay having sev-eral novel features and offering this protection has beendesigned by the Westinghouse Electric & ManufacturingCompany and is known as the Type B. This relay withthe cover removed is shown in an accompanying cut. Thestationary parts consist of a current coil mounted in alaminated iron shell and a needle valve in the metal frame-work of the bellows. The moving part consists of a brassrod on which are mounted an iron core inside the coil, acontact cone below, and the