Image from page 128 of "American spiders and their spinningwork. A natural history of the orbweaving spiders of the United States, with special regard to their industry and habits" (1889) 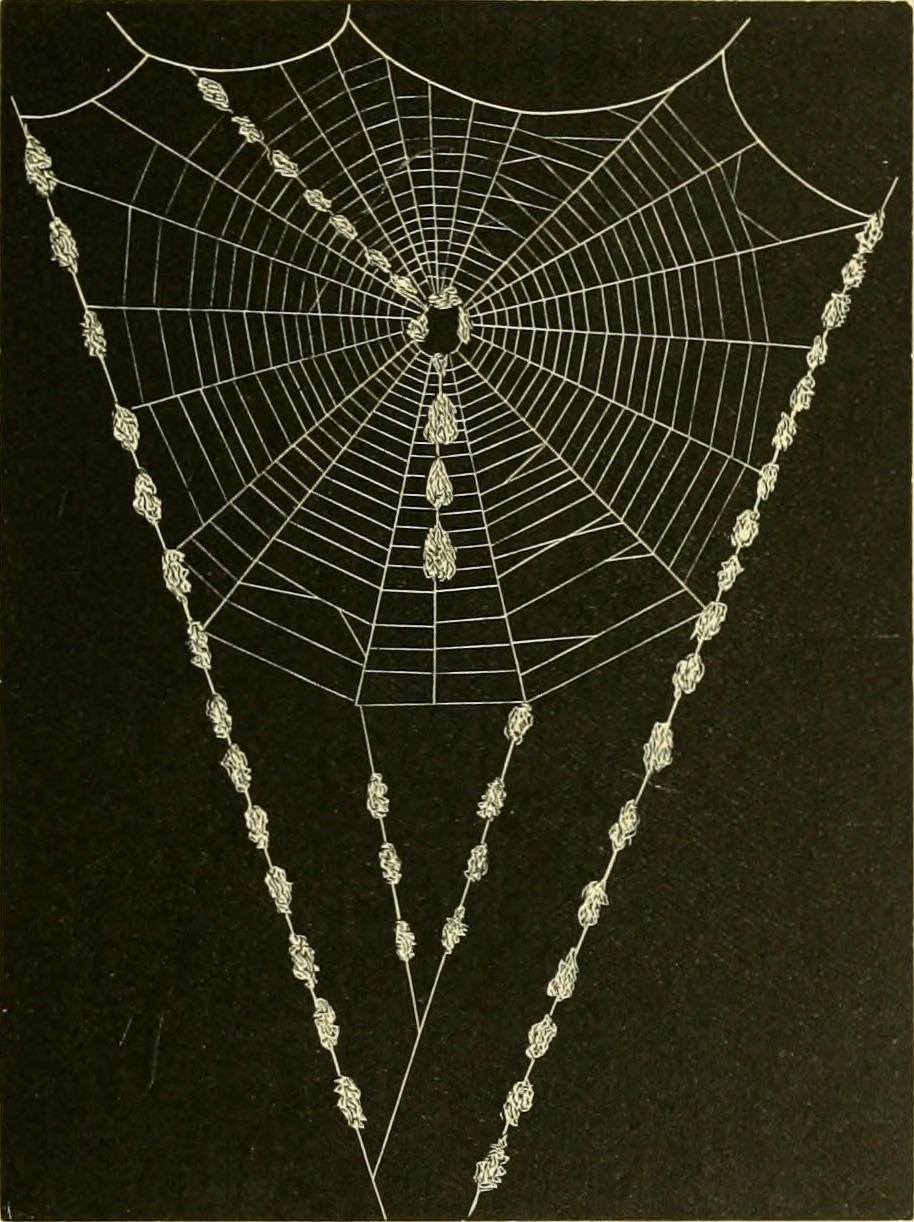 
Text Appearing Before Image:
in. This web was spunwithin a triangular S2:)aceof two feet or more inlength from top to bottom.This space was marked offby foundation lines, whichwere decorated in a pecu-liar manner, as representedin Fig. 110. This decora-tion consisted of tufts offlossy white silk from one-eighth to one-fourth inchlong. They were spreadalong the outer foundation lines throughout nearly their entire length.Several were also placed on the two inner supports of the orb. Tworadii, one above and another below the centre, were similarlyFlossy decorated, and several tufts were grouped around the hub, whichwas open. The number of these flossy tufts on one foundationline was twenty-one; on the other fifteen. The spider hung atthe centre of her web, which was vertical, and consisted of twenty-threeradii regularly crossed by spirals, many of which presented the deltatedappearance usually produced by the capture of insects. The figure heregiven is drawn simply to indicate the exact position of the flossy tufts

Text Appearing After Image:
Fig. 110. Snare oi Gasteracantha, to show the flossy tufts. Tufts onWebs. 12-4 AMERICAN SPIDERS AND THKIK SPINNIN(i\V()KK. —_ - ^ and of the orb witliin tlie triangular foundation lines. The other detailsare only approximately accurate. My notes do not show the complete form of the web, but Mrs. Eigen-raanns observations abundantly establish the fact that the orb of Gaster-acantha has the notched zone and free space as is the case with the websof Epeira, which it closely resembles. None of the California webs, how-ever, had anything like the tufted decorations which I observed in theTexas individual. Whether or not other examples in the same vicinityexhibit the peculiarity which I have described I am not able to say.^ The interest in the problem here presented is much increased, although the problem itself is brought little nearer solution, by facts concerning the snares of this genus recorded by M. Vinson.^ He observed the African gjinie characteristic noticed by me in the Texas ex