Image from page 148 of "American spiders and their spinningwork. A natural history of the orbweaving spiders of the United States, with special regard to their industry and habits" (1889) 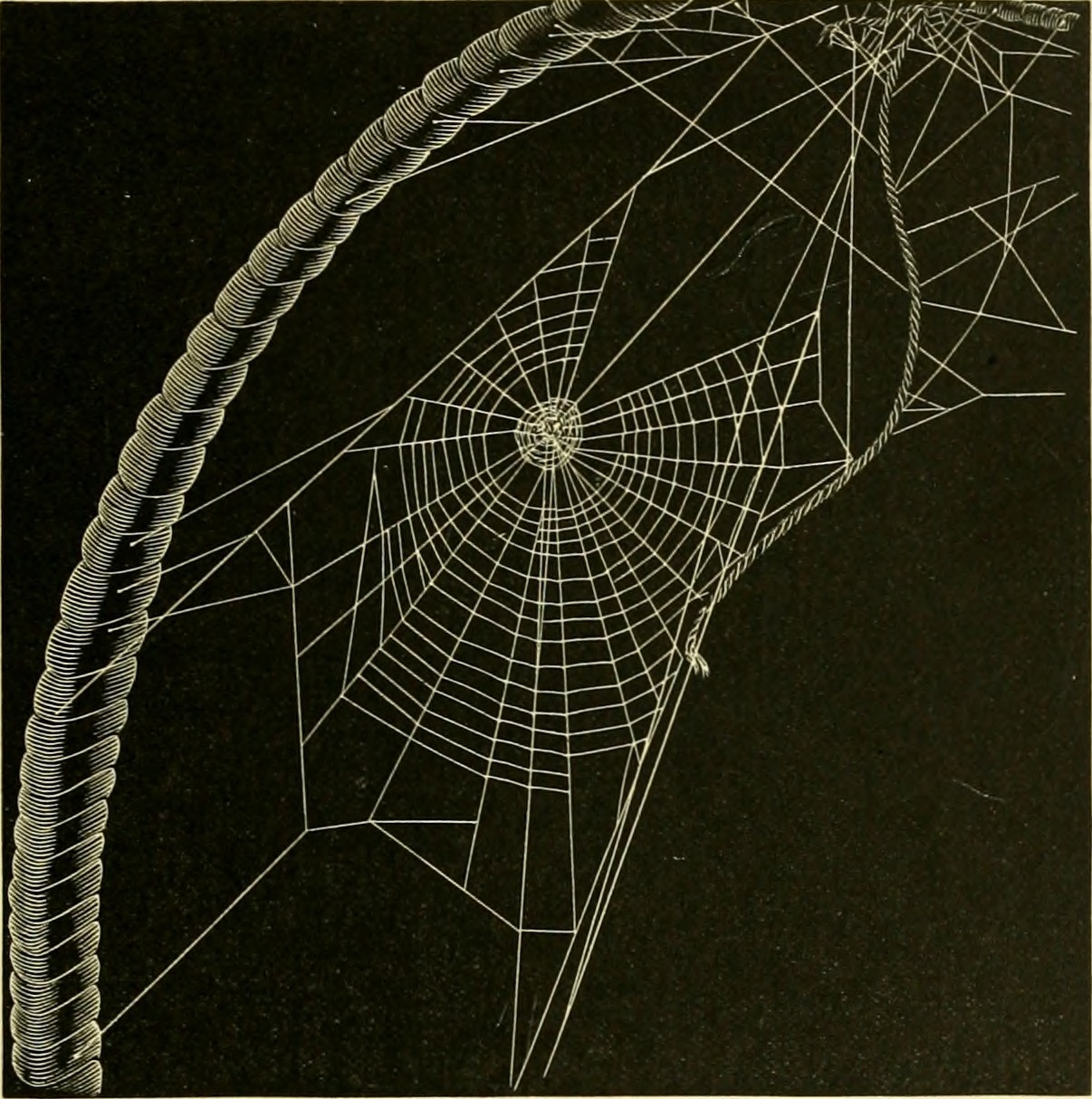 
Text Appearing Before Image:
pecies which proved to be Zilla x-notata. In subsequent correspondence I ascertained that the snare of thisZilla aranead was distinguished by a free sector, and several cocoons were forwarded, from which I succeeded in raising fine broods ofyounglings. These I located upon plants and various elevated objects withina warm room, and as they freely spun their characteristic orbs I soon hada number for study, of wliich an example is figured. Fig. 133 was spununderneath tlie handle of a small basket, and is drawn natural size. The COMPOSITE SNARES AND SECTORAL ORBS. 143 spirals were carried around in loops, quite as represented ; the hub wasmeshed and surrounded by a notched zone. A bit of cotton cord thatclung to the handle had been utilized as a support for the foundation lineson one side (on the right of the cut), and within a scant series of cross-lines at the top a slight nest had been woven in which the little Zillarested. Her feet clasped a trapline attached to the hub by a deltated

Text Appearing After Image:
Fig. 133. Sectoral orb of young Zilla x-notata, woven under a basket handle. Natural size. terminus. The free space was decidedly marked, as it was in mo.st of theorbs made. My first opportunity to study Zilla in a natural site (uncolonized) hap-pened to be upon the grounds of Mr. F. M. Campbell, at Hoddesdon, Hartz,England. Later I noted the snares of great numbers of the genus in thehighlands of Scotland, particularly in the neighborhood of Loch Achray and Loch Katrine. One especially interesting colony was lo-A Scotch ^^^^^ ^^ j^i^g sluices which regulate the flow of water from Loch Katrine. A footwalk crosses the stream, along which are shortiron posts and an iron rail. Vast numbers of Zilla had settled along thecornices and panels of these posts, and from their nesting places had 144 AMERICAN SPIDERS AND THEIR SPINNINGWORK Zillaatrica. stretched their characteristic webs diagonally across to tlie hand rail. Itthus happened that as many as a dozen or fifteen snares would be l)uilt