Image from page 59 of "American spiders and their spinningwork. A natural history of the orbweaving spiders of the United States, with special regard to their industry and habits" (1889) 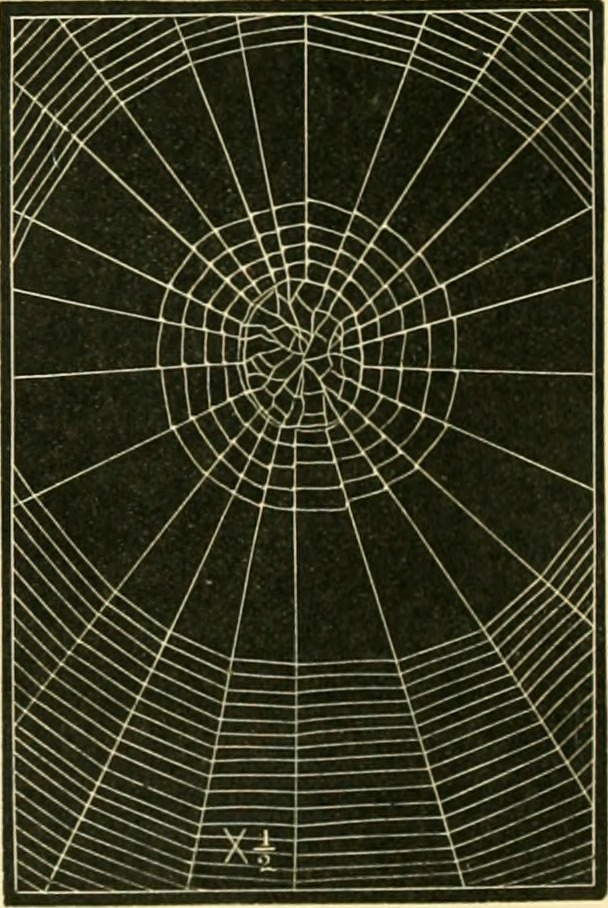 
Text Appearing Before Image:
49.) The Central Space is included between the centre of the orl) and theorigin of the Spiral Sj^ace. It has threedistinct parts, the Hub, the Notched zone,and the Free zone. The Hub is a smallcircular part immediately surrounding thecentime, which is either wholly open, orcovered in whole or in i)art by sjjinning-work. 1. The Meshed Hub is wholly or partlycovered by a series of iiTegularly shapedmeshes, through which one can often tracethe continuation of the radii as zigzag lines.In fact, it niay be considered as a smallrudimentary and irregular orbweb (Fig.50). Usually it nearly corresponds in sizeto the length (including the legs) of thespider that has woven it. The spider when waiting for her preyupon her snare is frequently and at night generally stretched upon or near this hub, fig. so. Meshed hub and central space. Kiiyt puhlishecl in Our Continent, Philailclpliia, No. 33, piifrc 3(52, 18S2, an.l -Pro-ceedings of the Acadcniy of Natural Sciences, Philadelphia, 1882, page 257.

Text Appearing After Image:
GENERAL CHARACTERISTICS OF ORBWEAVERS SNARES. 55 MeshedHub. SheetedHub. and a close observation of her feet will show that the claws grasp, andeven draw out somewhat the lines which represent the radii continued.Every motion of the net is thus communicated more readilythrough the taut lines to the sensitive feet. The brushes ortufts of delicate hairs with wliich these organs are provided,and which are in contact with the lines, must greatly increase the sensi-tiveness of the creature to every movement. This natural telegraphy is, perhaps, also aided by a short line extend-ing from the spinnerets to the upper part of the hub. This line is aptto divide into two, or radiate into several branches near the hub. In thisj)Osition, of course, the apex of the sjjiders abdomen is slightly deviated(Fig. 51). However, the chief design of this habit is probably to hold thearanead to her snare when she rushes after herprey, or to give her a point of attachment fordropping out of the web, or running