Image from page 107 of "History of the flag of the United States of America : and of the naval and yacht-club signals, seals, and arms, and principal national songs of the United States, with a chronicle of the symbols, standards, banners, and flags of an 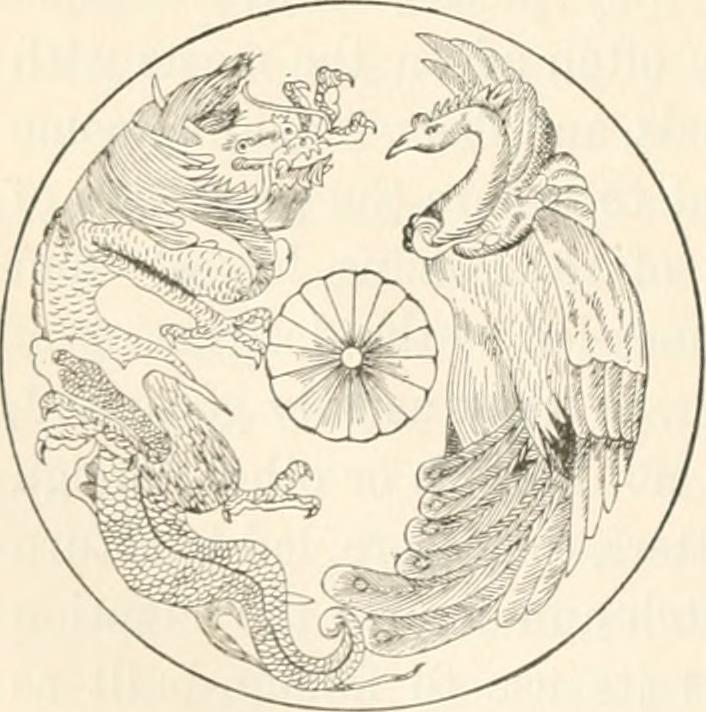 
Text Appearing Before Image:
y of the full moon; 3d, theeve of the new moon. The colors of this standard were white andpurple. Eecently, the Emperor, or Tenio, has adopted the chrysantliemumfor his emblem, having for supporters a dragon and phenix, typify-ing power and the reign of virtue, dis-played on a round shield. The chrys-anthemum, with sixteen petals, is usedfor outside imperial government busi-ness. Another imperial device, the per-sonal crest of the mikado, is the Idri{Paulovmia im2)erialis), used for pal-ace matters personal to the emperor. It is remarkable that in Japan a serpent is considered the vilest of Imperial Ai-ms of Japan, isso. auimals, but a dragou is thought to be of high birth and of great importance, the symbol of power and the badge of royalty. The phenix is an omen of prosperity and felicity, and is thought tohave appeared at different times to signalize the coming of virtuousrulers, and reascending to heaven after the performance of wonderful 1 Communicated by S. Wells Williams, LL.D.

Text Appearing After Image:
OF ANCIENT AND MODERN NATIONS. 79 works. A representation of this bird was formerly carried before themikado whenever he made a journey. All the nobles of Japan have a device or coat of arms, whichis blazoned on their banners and on their tents, and worn on theirshoulders and on the backs of their dresses. The naval flag recentlyadopted by the Japanese bears on the centre of a white field a redball or globe, supposed to represent the sun. The imperial standard has a golden sun in the centre of a crim-son field, with a network of golden diamonds woven over it. The a.d-miraVs flag is the same as the naval flag, with a red, blue, or yellowborder, in the order of. their rank. The Japanese bark, Tu-Ju-Mara, of six hundred tons, commandedby Captain Samuel A. Lord, formerly of Salem, Mass., and manned ex-clusively by Japanese sailors, arrived at San Francisco, Cal., Aug. 23,1872, and for the first time in history displayed the Japanese flag atthe masthead of a merchantman in American waters.