Image from page 121 of "Annual Reports of the Department of the Interior for the Fiscal Year Ended June 30, 1900--Twenty-First Annual Report of the United States Geological Society" (1901) 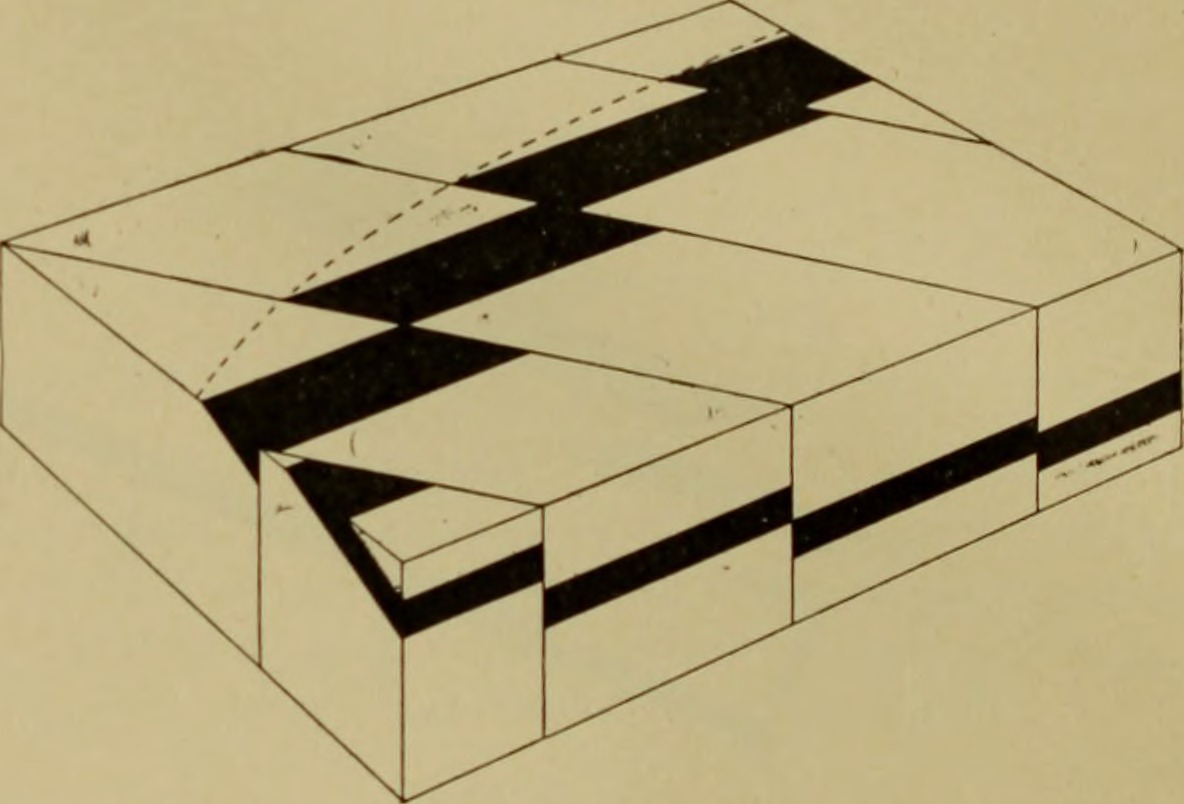 Try to find the date or year when this image was made.
Thanks for contributing!
Identifier: annualreportsofd003unit
Title: Annual Reports of the Department of the Interior for the Fiscal Year Ended June 30, 1900--Twenty-First Annual Report of the United States Geological Society
Year: 1901 (1900s)
Authors: United States Department of the Interior
Subjects:
Publisher:
Contributing Library: Clemson University Libraries
Digitizing Sponsor: LYRASIS Members and Sloan Foundation


Text Appearing Before Image:
along the planes which form the largest scarps. l)ut rather in a seriesof narrow zones of parallel faults located near the larger of the presentcliffs. •_M (iKoi.. IT ;^—01 -7 96 NEWARK SYSTEM OF POMPERAUG VALLEY, CONN. Another excellent example of rampart structure due to a distribu-tion of throw seems to be afforded by the slope which rises into CastleRock on the west of the Pomperaug River north of Pompcraug vil-lage. Here the larger steps are indicated in the topography, thoughtoo suiall to appear upon the topographic map (cf. fig. -il, p. 111). LATKliAL DISPLACEMENT. The lateral displacement of the faults of the Pomperaug Basin is,as would be expected in the case of faults hading near the vertical,practically inappreciable. Apparent lateral displacement is, however,to be noted in the offsetting of beds in outcrop, as has aheadj^ beendescribed from near South Britain. This kind of lateral displacementis a well-known feature of vertically faulted regions where the beds are

Text Appearing After Image:
Fig. 34.—Diagram to illustrate crescentic offsetting of outcrops due to progressively increasing throwof orographic blocks. not too steeply inclined. The lower the angle of dip of the beds thegreater will be the apparent displacement due to upthrow or down-throw. Crescentic offsetting of heda.—The successive offsetting of beds inoutcrop so as to produce a crescent-shaped outline to exposures, ashas been observed in the South Britain district, can be produced byparallel vertical faults in one or more of three waj^s. These are:First, by regular increase in the dip of the beds, due to differentialtilting of the included oi-ographic blocks (fig. 33); second, by progres-sive increase of the throw without differential tilting (fig. 34); and,third, by progressive decrease of the fault interval (fig. 3.5). Thefirst of these processes would result in a decrease in the width ofexposure to correspond with increase of dip. This not having beendetected in the special case which we are consider