Image from page 119 of "The road to Oz; in which is related how Dorothy Gale of Kansas, the Shaggy Man, Button Bright, and Polychrome the Rainbow's daughter met on an enchanted road and followed it all the way to the marvelous land of Oz" (1909) 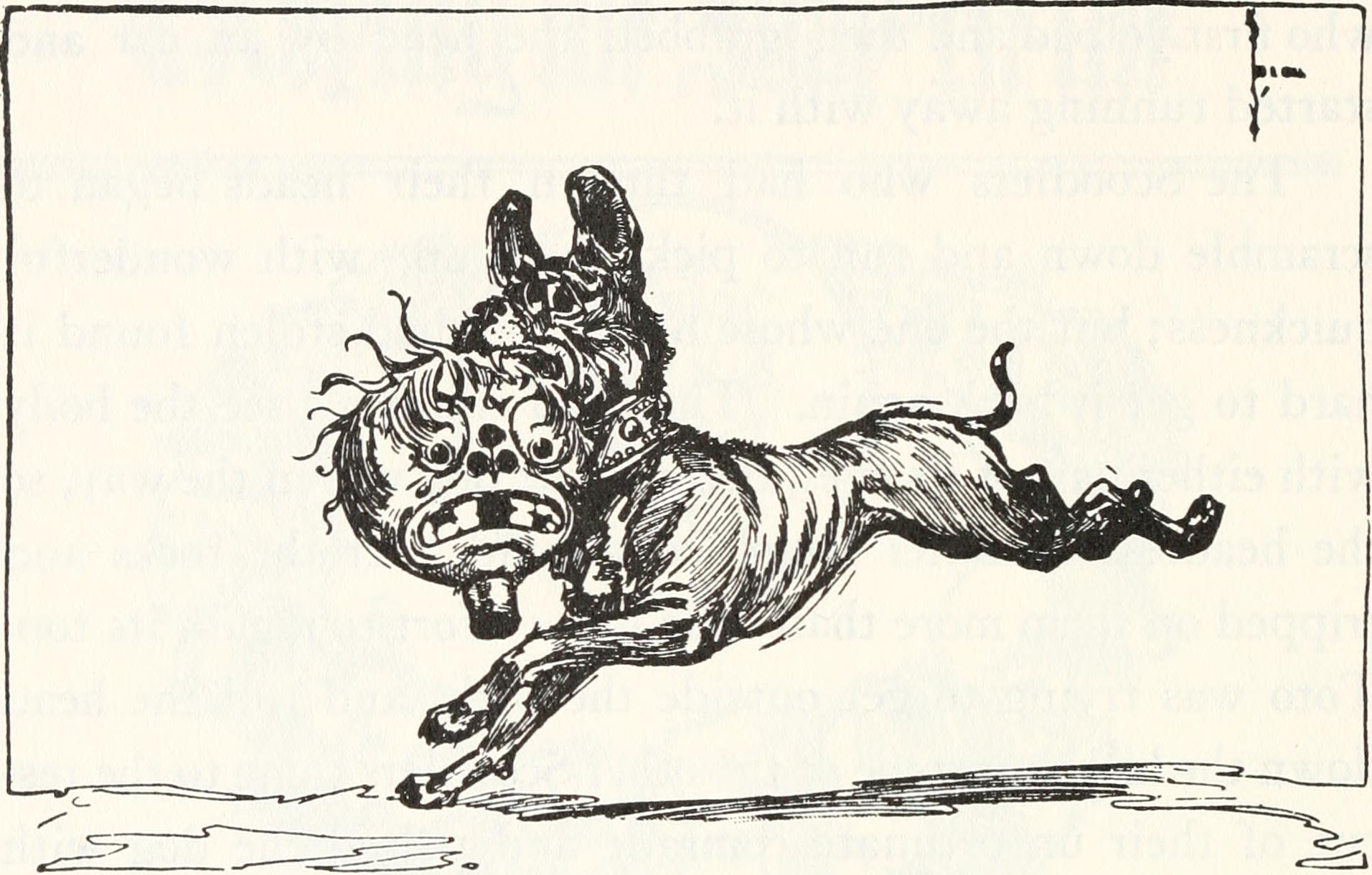 Try to find the date or year when this image was made.
Thanks for contributing!
Identifier: roadtoozinwhichi00baum
Title: The road to Oz; in which is related how Dorothy Gale of Kansas, the Shaggy Man, Button Bright, and Polychrome the Rainbow's daughter met on an enchanted road and followed it all the way to the marvelous land of Oz
Year: 1909 (1900s)
Authors: Baum, L. Frank (Lyman Frank), 1856-1919 Neill, John R. (John Rea), ill
Subjects: Fairy tales
Publisher: Chicago : Reilly & Lee
Contributing Library: New York Public Library
Digitizing Sponsor: MSN


Text Appearing Before Image:
f its eyes, because the dog was in the way, sothe headless Scoodler stumbled around over the rocks andtripped on them more than once in its effort to regain its top.Toto was trying to get outside the rocks and roll the headdown the hill; but some of the other Scoodlers came to the res-cue of their unfortunate comrade and pelted the dog withtheir own heads until he was obliged to drop his burden andhurry back to Dorothy. The little girl and the Rainbows Daughter had both es-caped the shower of heads, but they saw now that it would beuseless to try to run away from the dreadful Scoodlers. We may as well submit, declared the shaggy man, in arueful voice, as he got upon his feet again. He turned to-ward their foes and asked: What do you want us to do? Come! they cried, in a triumphant chorus, and at oncesprang from the rocks and surrounded their captives on allsides. One funny thing about the Scoodlers was they couldwalk in either direction, coming or going, without turning The Road to Oz

Text Appearing After Image:
around; because they had two faces and, as Dorothy said,two front sides, and their feet were shaped like the letterT upside down (JL). They moved with great rapidity andthere was something about their glittering eyes and contrast-ing colors and removable heads that inspired the poor pris-oners with horror, and made them long to escape. But the creatures led their captives away from the rocksand the road, down the hill by a side path until they came be-fore a low mountain of rock that looked like a huge bowlturned upside down. At the edge of this mountain was adeep gulf — so deep that when you looked into it there wasnothing but blackness below. Across the gulf was a narrow 114 Escaping the Soup-Kettle bridge of rock, and at the other end of the bridge was anarched opening that led into the mountain. Over this bridge the Scoodlers led their prisoners, throughthe opening into the mountain, which they found to be an im-mense hollow dome lighted by several holes in the roof. Allaround t