Image from page 202 of "American spiders and their spinningwork. A natural history of the orbweaving spiders of the United States, with special regard to their industry and habits" (1889) 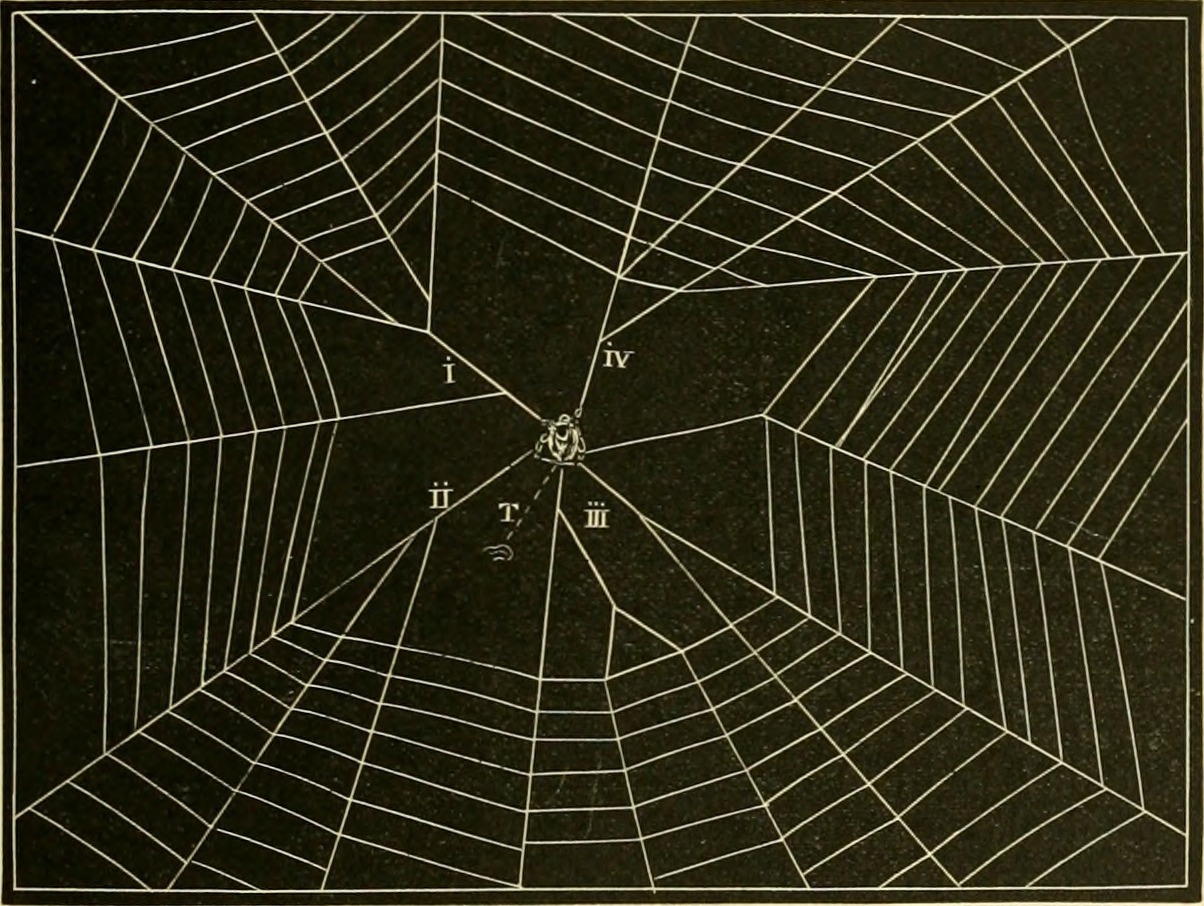 
Text Appearing Before Image:
e thaton structural grounds alone it may be well ranked with the Urbitolariie. THE RAY SPIDER AND HER SNARE. 197 more careful examination of the spinningwork of these little strangers. Asthe snares were hung invariably within the interstices of rocks formingthe remains of a ruined dam, or in cavities underneath roots of old stumpsof trees, or in recesses of the overhanging banks of a little brook or run,everywhere shadowed by shrubbery and thick foliage, it is not strange thatthe peculiarity failed to attract attention, and was only developed by morecareful research. On account of the continually changing form of the snare, it will benecessary to present it from various points of view, and as seen in differ-ent stages of its diurnal changes. Fig. 187 presents a view of thenare snare in a partially relaxed condition. The spider is seen seatedin the centre of a series of rays, i, ii, iii, iv, v, which are graspedby the tliird and fourth pairs of legs. There is no hub, properly speaking.

Text Appearing After Image:
Fn;. 189. view from front. Web taut. Perspective not shown. Central opening e.xaci. but the axes of the rays may be seen at times united upon a centralpoint, as at H, Fig. 188. The general tendency is to four or five maindivisions or rays, as may be seen by studying the figures presented. Butthere is more or less variation, and in the course of the days usage incapturing prey two sections will become interblended upon one axis, asappears to be the case in Fig. 188 and also in Fig. 191. The central space is a large, irregular opening, constituting about one-third of the entire snare, whose diameter is usually from three to fiveinches, as at Fig. 189, which is drawn natural size. The central circle,meslies, and notched spirals which so generally characterize orbwebs arethus wholly wanting in the Actinic snare. 198 AMERICAN SPIDERS AXD THEIR SPINNINGWORK.