Image from page 700 of "History of the flag of the United States of America : and of the naval and yacht-club signals, seals, and arms, and principal national songs of the United States, with a chronicle of the symbols, standards, banners, and flags of an 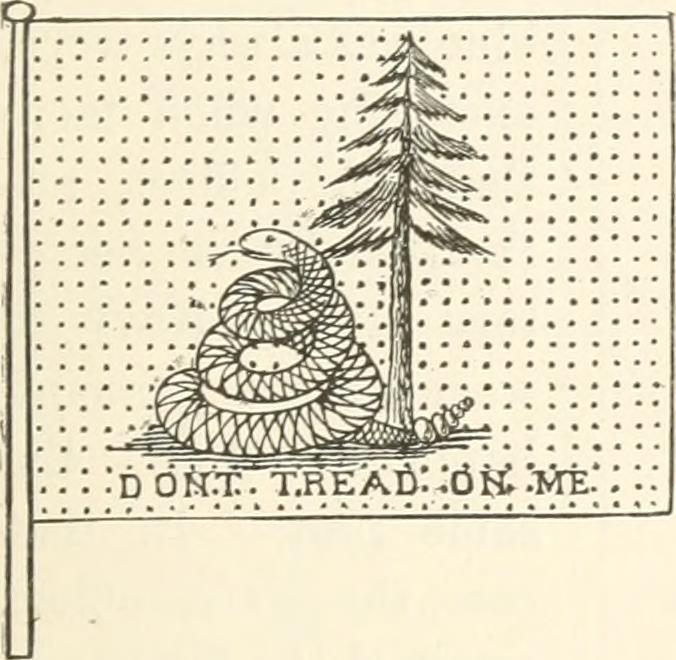 
Text Appearing Before Image:
lime,That it will float until the eternal morningPales in its glories all the lights of time. Anonymous. PART YII. THE DISTINGUISHmG FLAGS OF THE UNITED STATES NAVY. 1776-1880. From the formation of our navy to the present time, a long and nar-row pennant, or coach-whip, as generally called, has been the designat-ing mark of a captain in the navy, and of officers of inferior rank whenin command of a United States vessel of war.^ One of the earliest laws of the Continental Congress, on the subjectof a navy, forbade merchant ships or privateers wearing this symbol of rank and authority when in the pres-ence of a vessel of war. The first commander-in-chief of theAmerican navy. Commodore Esek Hop-kins, wore for his standard a squareyellow silk flag, blazoned with a livelyrepresentation of a rattlesnake in theact of striking, and underneath it themotto, Dont tread on me. One de-scription of this flag says, the rattle-snake was at the foot of a pine-tree.How long this flag continued in use.

Text Appearing After Image:
Flag of the Naval Commander-in-chief,1776. 1 When Aan Tromp, the Dutch admiral, hoisted a broom at his masthead, to indi-cate his intention to sweep the English from the sea, the English admiral hoisted a horse-whip, indicating his intention to chastise the insolent Dutchman, Ever since that time,the narrow, or coach-whip, pennant, symbolizing the original horse-whip, has been the dis-tinctive mark of a vessel of war, adopted by all nations. It is the custom in England to hang a broom at the masthead of a vessel offered forsale at auction. The following is an advertisement of signals used in the royal navy as early as1722: — Advertisement. JUST published the Sailing and Fighting Instructions or Signals, as they are observedin the Royal Navy of Great-Britain ; being a neat Pocket Volume, Engraven onCopper Plates, and printed on a superfine Elephant Paper, with a Sliip to eacii Signal,and the various Signal Flags, painted in their own [)roper Colours. Very useful and nee- (iCO TFIE DI