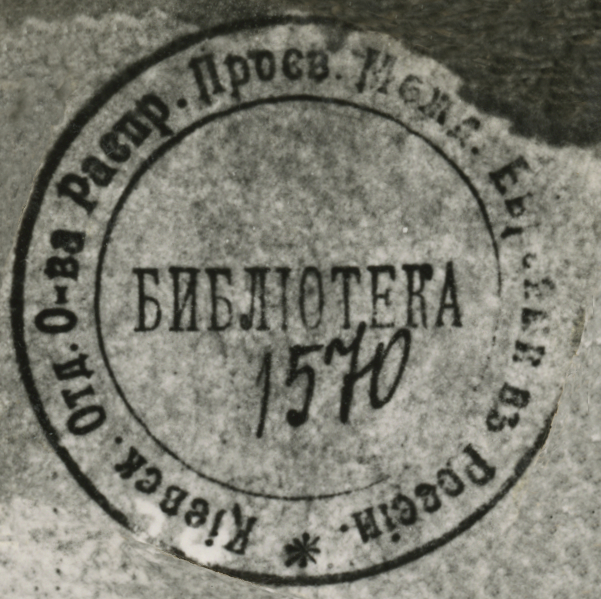 Try to find the date or year when this image was made.
Thanks for contributing!
Library of the Kiev Branch of the Society for the Promotion of Culture among the Jews of Russia. 1570.

The Society for the Promotion of Culture among the Jews of Russia was a civic and educational association founded in Saint Petersburg in 1863 by prominent and wealthy Russian Jews, with Joseph Yohel Günzburg as its most well-known co-founder and president . It attempted to educate and acculturate the Jews of Russia by providing assistance to Jewish students at Russian universities, encouraging publication and authorship of books relating to Judaism, and helping Jewish libraries, among other projects. They also wanted Jews to move away from speaking Yiddish and toward speaking Russian. It started out with weak membership, but interest in it grew among Jews after the pogroms of the 1880s. Branches were founded across the Russian Empire, with the most important in Moscow, Riga, Kiev, and especially Odessa. The organization was forced to close in 1929 due to the Soviet policy of closing independent political and cultural organizations. This branch was located in Kiev.

This book stamp is from a book looted by the Nazis and sorted by Colonel Seymour Pomrenze, one of “the Monuments Men,” at the Offenbach Archival Depot.

There are two scrapbooks of archival markings from the books sorted at the Offenbach Depot in the Seymour Pomrenze Collection held by the American Jewish Historical Society (Call number P-933) There is a finding aid for the collection here The digitized scrapbooks are available here and here.

For more information on this project check the Center’s blog: 16thstreet.tumblr.com/tagged/Offenbach-Depot

Dr. Mitch Fraas, Acting Director of the Digital Humanities Forum at the University of Pennsylvania Libraries' Special Collections Center is working on a similar project for the German book stamps based on NARA microfilm of the volumes the American Jewish Historical Society currently holds. See viewshare.org/views/mfraas/offenbach-bookplates/

The Center for Jewish History would like to acknowledge the following: The American Jewish Historical Society, who graciously allowed the use of their archival materials and digital content; Mitch Fraas, Acting Director of the Digital Humanities Forum at the University of Pennsylvania Libraries' Special Collections Center, for his data and technical assistance in this project; David Rosenberg, Senior Manager for Communications, and Melanie Meyers, Senior Reference Services Librarian for Special Collections, for managing and creating the digital map; as well as Reference Services Librarian Zachary Loeb and Reference Services Assistant Ilya Slavutskiy for their work on translating and mapping.