Swimming by a breakwater 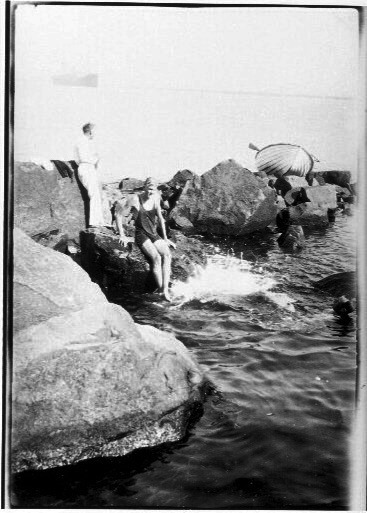 Try to find the date or year when this image was made.
Thanks for contributing!
This photograph is part of the Australian National Maritime Museum's collection of nitrate negatives taken by Harold Nossiter and his son Harold Nossiter Junior in the 1920s and 1930s.

Harold Nossiter (senior) was a noted Sydney sailor in the 1920s and 1930s who became the first Australian to skipper a yacht around the world under an Australian flag.

This photo is thought to have been taken on one of Harold Nossiter's UTIEKAH II cruises to the Shoalhaven River in 1927.

The Australian National Maritime Museum undertakes research and accepts public comments that enhance the information we hold about images in our collection. If you can identify a person, vessel or landmark, write the details in the Comments box below.

Thank you for helping caption this important historical image.