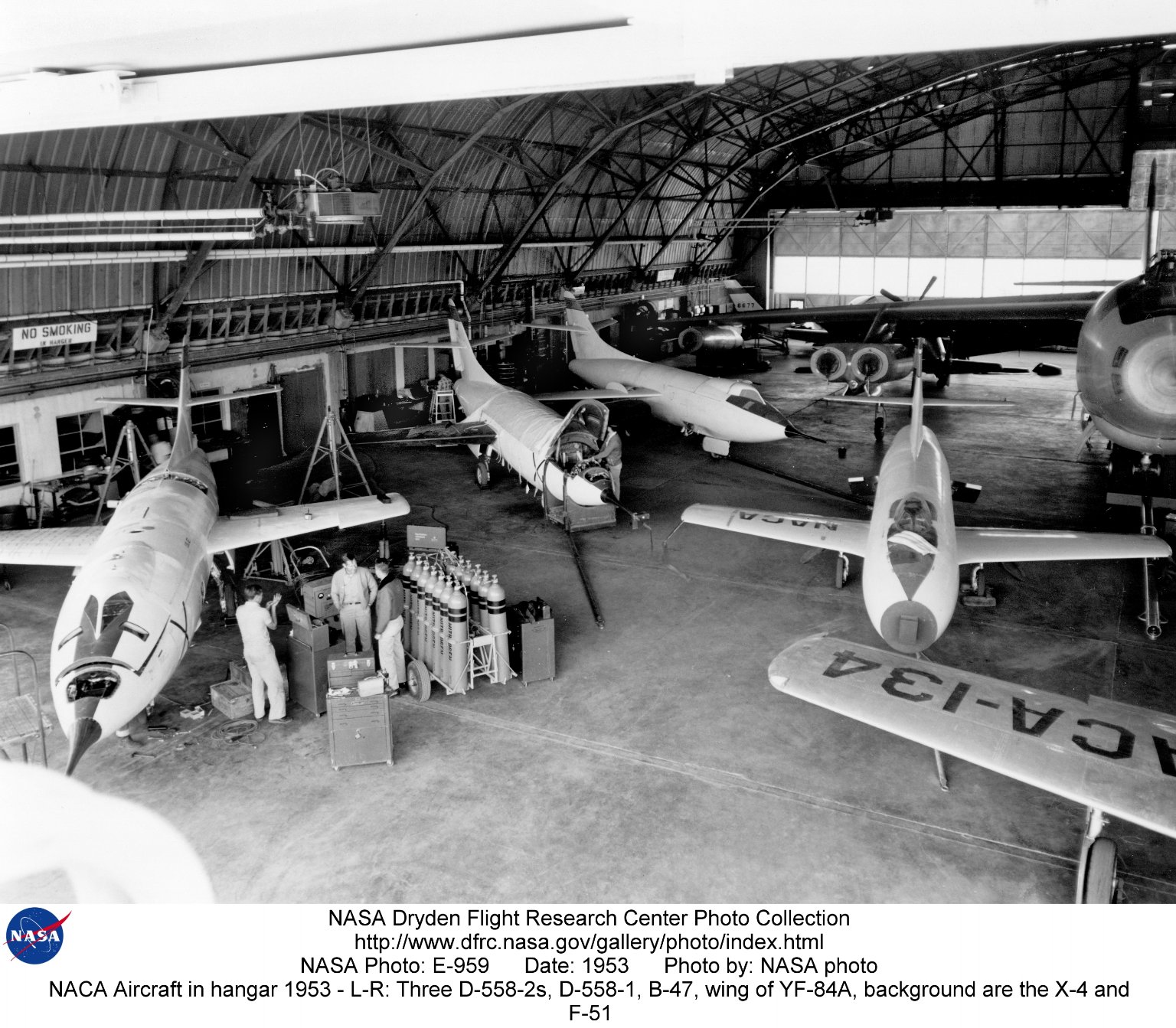 Try to find the date or year when this image was made.
Thanks for contributing!
Description (1953) The aircraft in this 1953 photo of the National Advisory Committee for Aeronautics (NACA) hangar at South Base of Edwards Air Force Base showed the wide range of research activities being undertaken. On the left side of the hanger are the three D-558-2 research aircraft. These were designed to test swept wings at supersonic speeds approaching Mach 2. The front D-558-2 is the third built (NACA 145/Navy 37975). It has been modified with a leading-edge chord extension. This was one of a number of wing modifications, using different configurations of slats and/or wing fences, to ease the airplane's tendency to pitch-up. NACA 145 had both a jet and a rocket engine. The middle aircraft is NACA 144 (Navy 37974), the second built. It was all-rocket powered, and Scott Crossfield made the first Mach 2 flight in this aircraft on November 20, 1953. The aircraft in the back is D-558-2 number 1. NACA 143 (Navy 37973) was also carried both a jet and a rocket engine in 1953. It had been used for the Douglas contractor flights, then was turned over to the NACA. The aircraft was not converted to all-rocket power until June 1954. It made only a single NACA flight before NACA's D-558-2 program ended in 1956. Beside the three D-558-2s is the third D-558-1. Unlike the supersonic D-558-2s, it was designed for flight research at transonic speeds, up to Mach 1. The D-558-1 was jet-powered, and took off from the ground. The D-558-1's handling was poor as it approached Mach 1. Given the designation NACA 142 (Navy 37972), it made a total of 78 research flights, with the last in June 1953. In the back of the hangar is the X-4 (Air Force 46-677). This was a Northrop-built research aircraft which tested a swept wing design without horizontal stabilizers. The aircraft proved unstable in flight at speeds above Mach 0.88. The aircraft showed combined pitching, rolling, and yawing motions, and the design was considered unsuitable. The aircraft, the second X-4 built, was then used as a pilot trainer for approach and landing studies. This data was used in designing later rocket-powered aircraft. Almost hidden in the back of the hangar is the ETF-51D (NACA 148/Air Force 44-84958). This two-seat trainer was used as a low-speed chase aircraft, as well as for support flights and liaison missions. It arrived at the NACA High Speed Flight Research Station on September 5, 1950, and was retired from NASA service after a taxi accident on April 15, 1959. The U.S. Army unit at Edwards AFB repaired the aircraft, and used it for helicopter chase work. On the right side of the photo the B-47A (NACA 150/Air Force 49-1900) and YF-84A (NACA 134/Air Force 45-59490) are visible. The B-47A was the first production aircraft built by Boeing. The aircraft was transferred from Langley Memorial Aeronautical Laboratory to the High-Speed Flight Research Station on March 17, 1953, where it was used for a wide range of research, including handling qualities, dynamic stability, gust loads, noise level measurements, aeroelasticity (the bending of the wings in flight), and a survey of the X-15 High Range. The YF-84A, in front of the B-47A, was used for vortex generator studies. The Dryden Flight Research Center, NASA's premier installation for aeronautical flight research, celebrated its 50th anniversary in 1996. Dryden is the "Center of Excellence" for atmospheric flight operations. The Center's charter is to research, develop, verify, and transfer advanced aeronautics, space, and related technologies. It is located at Edwards, Calif., on the western edge of the Mojave Desert, 80 miles north of Los Angeles. Dryden's history dates back to the early fall of 1946, when a group of five aeronautical engineers arrived at what is now Edwards from the NACA's Langley Memorial Aeronautical Laboratory, Hampton, Va. Their goal was to prepare for the X-l supersonic research flights in a joint NACA-U.S. Army Air Forces-Bell Aircraft Corp. program. NACA--the National Advisory Committee for Aeronautics--was the predecessor of today's NASA. Since the days of the X-l, the first aircraft to fly faster than the speed of sound, the installation has grown in size and significance and is associated with many important developments in aviation -- supersonic and hypersonic flight, wingless lifting bodies, digital fly-by-wire, supercritical and forward-swept wings, and the space shuttles. Its name has changed many times over the years. From 14 November 1949 to 1 July 1954 it bore the name NACA High-Speed Flight Research Station.