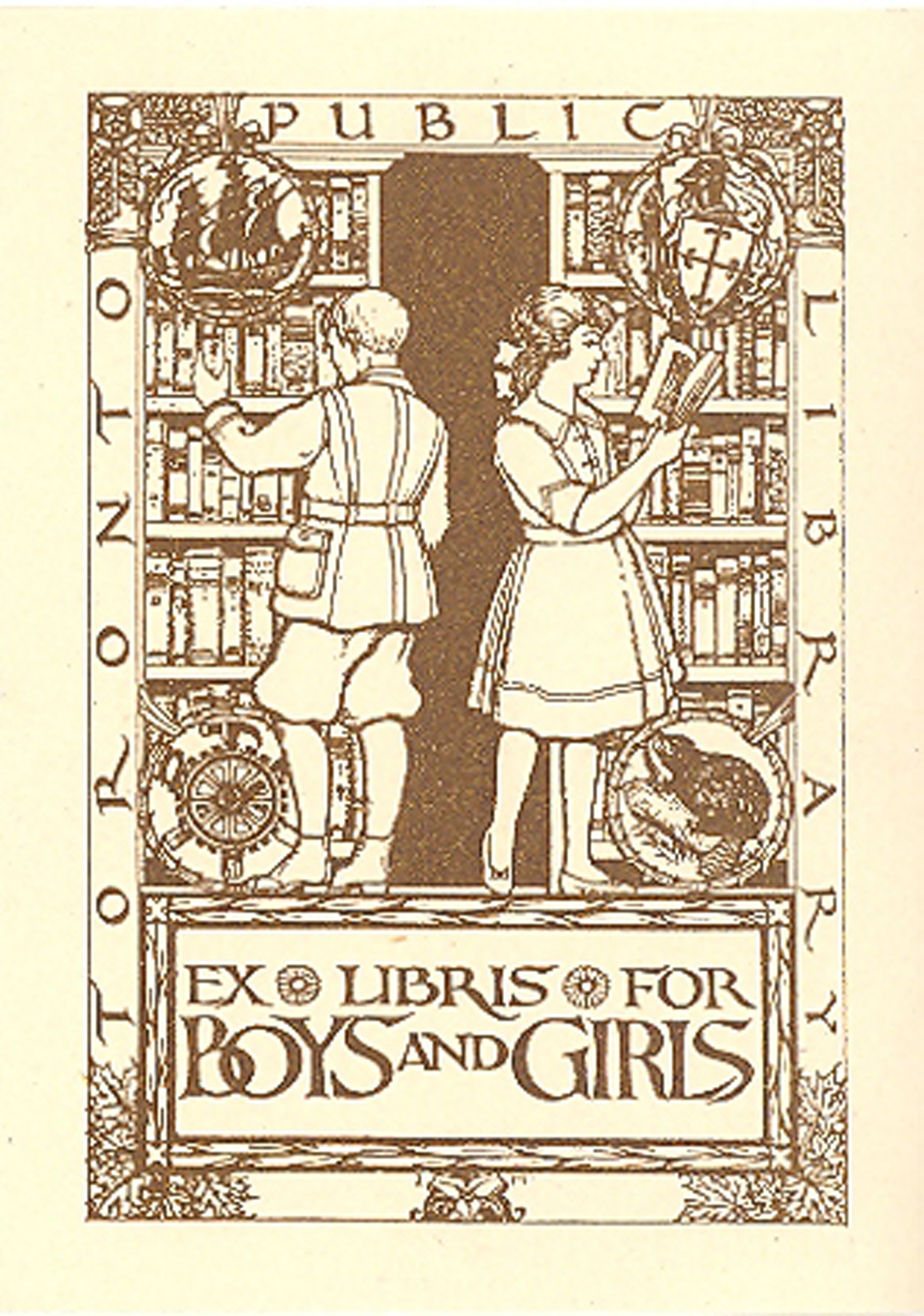 Try to find the date or year when this image was made.
Thanks for contributing!
Reminder: No known copyright restrictions. Please credit UBC Library as the image source. For more information see digitalcollections.library.ubc.ca/cdm/about.

Notes: In brown ink on white paper, a boy and a girl are standing with their backs to each other in front of two shelves of books. Around the children are four circular images: a ship at sea, a knight holding a shield, a beaver, and a wheel and tools. ; Bookplate Type : Pictorial ; Bookplate Function : OwnershipThe Toronto Public Library originated from the York Mechanics' Institute, which was established in 1830. In 1834, the Town of York was incorporated as a city and renamed Toronto, and on the city's fiftieth anniversary, 6 March 1884, the Toronto Public Library was officially opened in the former Mechanics' Institute building. The campaign in Toronto for a free public library was led by Alderman John Hallam, who became the first chairman of the Toronto Public Library Board. Various branches have been created around the metropolitan Toronto area since the 1800s, and following the amalgamation of Toronto in 1998, the Toronto Public Library now consists of 98 branches, making it the largest public library system in Canada. This particular bookplate was most likely created for the Boys and Girls House branch, which was opened in Toronto in 1922 and was the first library in the British Empire to be devoted exclusively to children. The bookplate's creator, J.E.H. MacDonald, was a founding member of the Group of Seven. He was born in Durham, England in 1873, and immigrated to Canada with his English mother and Canadian father in 1887. MacDonald studied art at the Hamilton Art School and the Central Ontario School of Art and Design in Toronto, but also received training in Toronto lithography houses. He began to work at Grip Limited, a design firm, in 1895 as a commercial artist and encouraged the staff there to develop as painters; in fact, four other original members of the Group of Seven had worked with MacDonald at Grip Ltd. MacDonald left the firm in 1911 to paint full time, and in 1922 accepted a teaching position at the Ontario College of Art. Despite working for many years as a professional designer, MacDonald only created about twenty or so bookplates. The Boys and Girls Library bookplate may have been commissioned in 1919; a study for the bookplate, now in the collection of the National Gallery of Canada, is dated that year. An identical bookplate is reported to have been created by MacDonald in 1914, however, for the Toronto Public Library's Canadiana Collection, although it is unknown if either of these dates is accurate. The iconography of the bookplate is representative of both collections, as it includes two children but also Canadian icons such as the beaver and the maple leaf, and so it is also difficult to determine by subject if the design was originally conceived for the Boys and Girls Library or the Canadiana Collection. The same bookplate can also be found in McGill University's Philippe Masson Ex Libris Collection. ; Institutional